A special event is coming your way during mid-October. DICE are looking forward to sharing full details with you at a later time. But for now… expect new earnable cosmetics alongside infantry only gameplay with tight play-spaces and intense close-quarters combat.

Renewal – Map Improvement
Our intent for the map rework is to improve the infantry & close quarter combat experience. Flags and objectives are now significantly closer to each other. This will reduce the traversal time and overall ‘time to action’ when moving between sectors and objectives. To increase the impact of these changes, we decided to completely remove certain sections of the map that broke the game flow or were considered to be too far away. 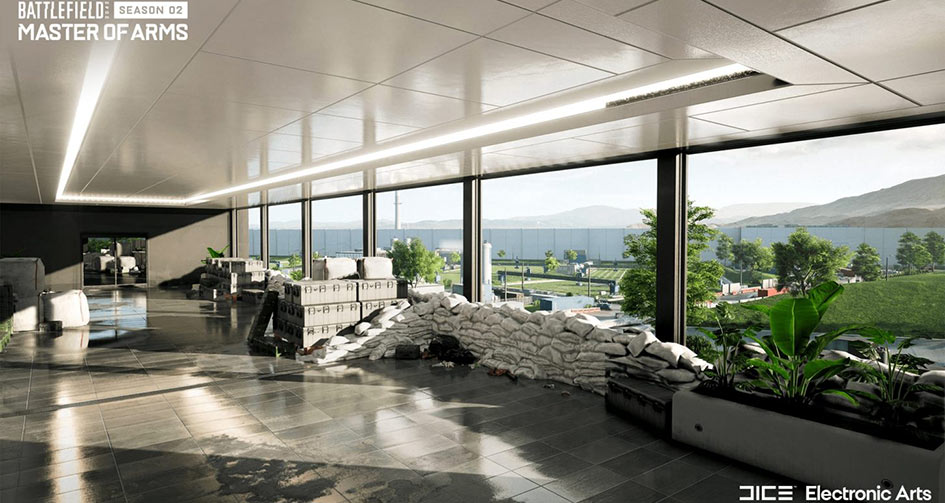 The Solar Station 1
The Solar Station remains the initial attack location in Breakthrough, only now it is heavily protected by huge concrete barriers, sturdy sandbags, shipping containers, and the large warehouses are perfect for hiding from air vehicles.

The Solar Station 2
Attacker vehicles will be crucial in helping in breaking down defenses. But be careful, enough stray shells can ignite a firestorm at this capture point.

Desert Terrain 1
The Terrain in Renewal has also been heavily reworked with a focus on providing clear infantry and vehicle paths and offering infantry better line of sight breakers and cover. When looking at our telemetry we could see that players did not move through the intended lanes across the desert terrain. The changes we made provide clearer paths for both infantry and vehicles.

Battery Farm
The Battery Farm has had a simplification pass and now promotes more predictable fighting lanes and lines of sight. Additional cover has also been placed, but you should remain wary of skybound threats.

Check Point – Green side
The check point on the farm side is now heavily fortified. Attackers will be able to use the new cover to slowly work their way to their new objectives. Vehicles can be a threat to these defenses, but the plethora of cover means C5 may always lurk around the corner.

Approach to Synseco Building 1
The approach to the Synseco building is now heavily fortified, offering vital cover to attackers. But cover alone here will not be enough to succeed, attackers must push through quickly.

Approach to Synseco Building 2
The central road that connects the checkpoint to the Synseco building is now the fortified spine of the map.

Interior Synseco Capture Point 1
Interiors of the Synseco building are no longer pristine. Instead they are storage areas for the defenders, their ammo crates and storage units making great cover for close quarters combat.

Interior Synseco Hallway
Lines of sight in the hallways are now broken by sandbags and ammo crates, making these spaces viable defense points. Sandbags against windows offer some protection against enemy snipers, but also make for a great nest for you to return some marksmen fire of your own.

Synseco Foyer
The first front line in the crucial building, defenders now have the luxury of sturdy defenses, forcing attackers to think twice about using the front door. 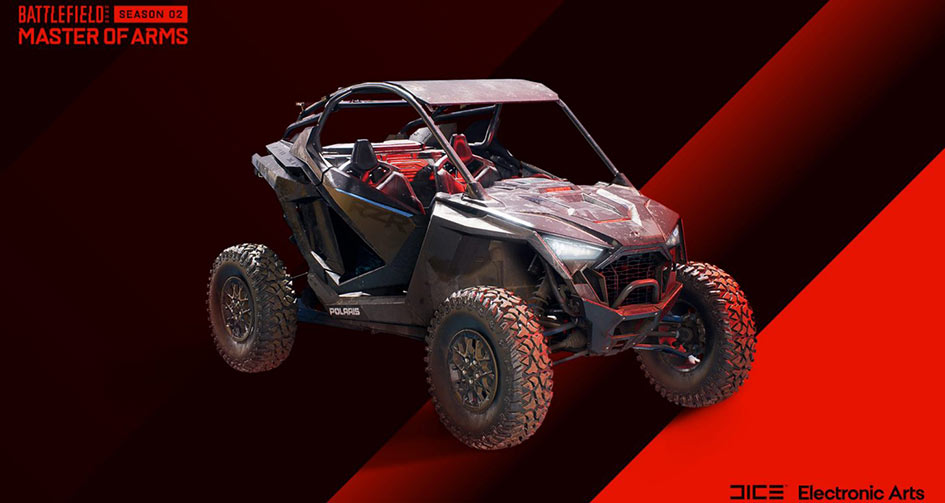 Fast and fun. The Polaris RZR is now available on the Battlefield as an in-world vehicle. Jump into this lightweight buggy with a teammate and zip across the Battlefield, surprising enemy infantry or gaining new, tactical positions.

NEW VAULT WEAPONS
3 Battlefield Portal iconic weapons from the Battlefield 3 and Bad Company 2 era are now available in the All-Out Warfare arsenal. You’ll unlock these Vault Weapons at your own pace via the new Assignment system.

P90 – Battlefield 3
A compact and capable weapon system firing 5.7x28mm armor-piercing rounds. It has three forward rails for a wide array of attachments. Comes with a 50 round magazine.

Players who previously observed mouse input lag during gameplay should feel an improvement with this game update. Please continue sharing your feedback about your experience with us once you’ve been able to play.

Fixed an issue that caused Overexposed lights on Soldier uniforms (IFF)
Fixed an issue where Repair VFX is still present for a short time after the user enters the vehicle
Fixed an issue where the character stance did not reset when entering/exiting vehicles
Fixed an issue where there grenade cooking animation was missing
Fixed an issue with the Large Impact Sound incorrectly being played when attaching C5 to vehicles
Fixed issues animations missing when throwing any grenade
Fixed issues with inconsistent face wrinkles on several characters. A proper skincare routine is important to compliment the active lifestyle of being on the Battlefield
Fixed an issue where Soldiers were visible for a second before spawning on the Spawn Beacon
Grenade throw animation should now play correctly
Fixed issue with Incorrect world log messages when repairing an air vehicle from the passenger seat
The Combat Hammer has should now have a hit indicator when striking a target
Sundance’s landing animation with the Wingsuit has been improved. It’s no longer causes jumpy behaviour
Fixed unintended behaviour for Soldier physics animations while in deep terrain craters
Improved prone behaviour in craters and on ledges
A temporary Soldier movement speed has been added when performing stance changes
A short cooldown has been added to prevent standing / prone stance change spam
Fixed a camera snapping issue when starting a slide
Improved hit detection from shots fired by soldiers while in moving and in open vehicle seats
A prone soldier is no longer able to push other prone soldiers around
Introduced new player collision behaviour for friendly Soldiers to help prevent body blocking in tight spaces. Friendly Soldiers that are moving will now be able to move through other Soldiers but will be pushed away whenever they stop moving to prevent clipping

Fixed an issue that would prevent jets from visually updating when viewed from a distance.
Hands are now correctly aligned on the 4×4 Utility steering wheel as soon as you enter the vehicle.
Minor tweaks to make exhausts look less odd in vehicle elevators. They were very exhausting.
The audio SFX from Stealth Helicopter bombs no longer persist after being fired.
The countermeasure prompt for vehicles is now only visible for the driver/pilot
The Gunner VE has been removed during spawn, now only showing when you are in the gunner position.
Updated the Air-to-Ground Missile crosshairs on jets to display the lock on crosshair
You will no longer hear the “In Stealth” target blocked audio when looking at a Stealth Helicopter with active dual 30mm Cannon Pods
The HEAT Shell has been renamed to HE Shell to better reflect its intended use as anti-infantry

Velocity has been increased from 150 -> 250
Detonation delay decreased from 0.15 -> 0.02
Vehicle detonation radius decreased from 10 -> 2
Damage multiplier to infantry reduced 0.47 -> 0.05
An issue has been resolved that caused the 60mm Flak Weapon Pod to unintentionally damage infantry when damaging vehicles

MD540 Nightbird – Mounted 7.62mm Miniguns
We are updating the miniguns to ensure they remain powerful when actively managed, while reducing their effectiveness during continuous fire.

Fixed an issue that caused AM40 and Avancys bullets to be registered as SMG bullets.
The AM40 Standard Issue Ammo now correctly displays the intended magazine count of 20.
The AM40 and Avancys can no longer be used underwater.
Adjusted deploy delays for Vault Weapons to ensure a smoother experience.
Fixed a bug where picking up the DM7 from the ground would show incorrect weapon icon.
Fixed an issue that caused the M11 scope on the BSV-M to not have the correct display.
Fixed an issue that was causing unwanted behavior on underbarrel ammo.
Fixed an issue that would cause the Avancys to display the wrong LOD when another player zoomed in on you.
Fixed an issue where the PF51 would shake when firing after switching from and to primary.
Fixed the suppressor muzzle flash being visible in front of the BSV-M when using certain scopes.
Missing hints for underbarrel attachments have been located.
Reload no longer sometimes go missing on the the SWS-10 when low on ammo.
SFX have been improved for Laser Sights.
The Ghostmaker R10’s attachments are now displayed on Kill Cards.
The PF51 now shows the correct Magazine size in the Collection screens.
The Target 8T scope now has the correct icon on the Avancys.

The Battlefield 2042 Update 2.2.0 is now available and focuses on things like: reworked version of Orbital, 3 new Vault Weapons, Laser Sight behaviour on weaponry and more. Orbital - Map Improvements Orbital is now more action packed with an improved atmosphere. I…

The Battlefield 2042 Update 2.1.1 will go live tomorrow: October 11 @ 08:00 UTC. This update is a small quality of life update and focuses on weapon balance changes and bug fixes. The M16A3 and M60E4 now have correct recoil reduction on Consoles to ensure their per…

Battlefield 2042 The Liquidators Event will start on October 11-25, 2022. Unlock unique skins and make every move count in Tactical Conquest. When you screw with the Dark Market, prepare to get terminated. Introducing The Liquidators, a vicious hit squad sent out f…