Battlefield 3 Battleblog #2 – With A Bit Of Class: Welcome to the second installment of the Battleblog, a blog series taking you all the way to the launch of Battlefield 3 on October 28th!.

In this blog series, you’ll learn more about every aspect of our biggest shooter ever. This time out is a look at the classes found in multiplayer with Senior Multiplayer Designer Alan Kertz.

Here at DICE, we’re very proud of the team play functionality that we have become known and loved for in the Battlefield series, and we’re continuing to embrace that approach for Battlefield 3, but not without a few upgrades for the new game. In Battlefield 3, we’re making sure each of the four playable classes (Assault, Engineer, Support and Recon) are each completely capable of holding their own in combat. While they each have different specialties, each class is a force to be reckoned with on the battlefield.

If you’re that kind of lone wolf player who simply wants to jump in and cook some fools, that’s perfectly fine – we’re making sure each class in Battlefield 3 packs a mean punch on their own, giving you another chance to play it your way. However, we’re also hard at work fine-tuning each class and their unique team play capabilities, so squads in Battlefield 3 will be able to function tightly, giving even more reasons to team play than ever before.

As mentioned, the four classes available in Battlefield 3 are Assault, Engineer, Support and Recon. All classes include familiar elements, but this time around, we’re tweaking things a bit, bringing something new to our online multiplayer. Our Assault class is still the frontline run and gun class, and considering the havoc and fallen team members someone will see while on the frontlines, the Assault soldier now has medic abilities. That’s right, all the abilities such as med kits and defibrillators typically found on the Medic class are now incorporated into Assault. It makes sense that the class on the frontline will be able to revive fallen team mates, right? Right! Remember, you can play it your way, so if you want to customise your Assault soldier more towards medic abilities or towards serious gunplay, it’s totally up to you. 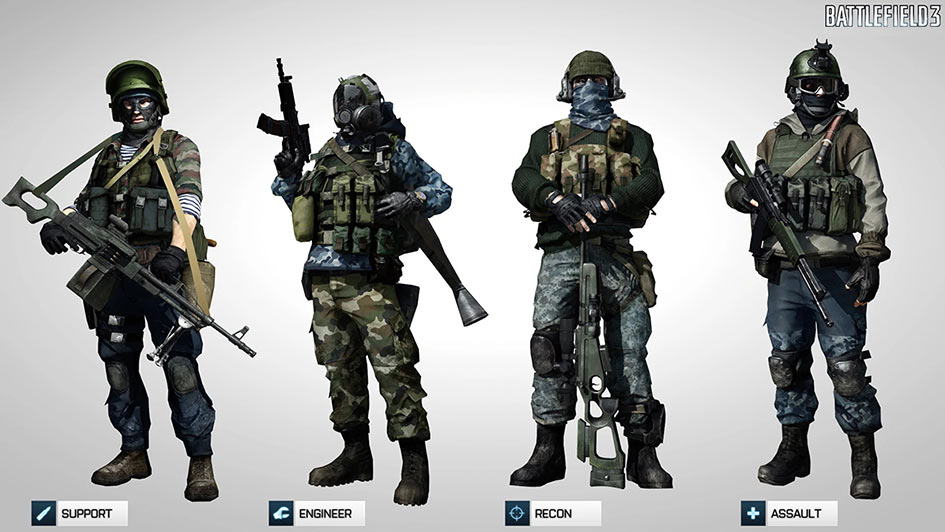 Engineers are returning in Battlefield 3, bringing back the class in charge of making repairs to the various vehicles on the battlefield. On the other hand, the Engineer is very adept at taking down vehicles as well – this class includes RPGs that can take down armored targets that can’t be destroyed by bullets alone, or even building facades that enemy combatants may be using to take cover. Add the fact that an Engineer’s arsenal includes Carbine weapons, you get an extremely versatile multiplayer class that can truly move like a butterfly and sting like a bee.

The Support class makes its return in Battlefield 3, incorporating the ability to use light machine guns and can lay down heavy fire, allowing him to become a serious mobile weapons platform. “Support has always been about heavy infantry firepower from his LMG,” says Alan Kertz, Senior Multiplayer Designer at DICE. “It’s a role that we’ve wanted to feel different than Assault’s running and gunning.”

This brings us to two new features in Battlefield 3: Bipods and Suppressive Fire. Bipods have a very practical use, especially for LMGs, as they provide a substantial increase in stability while laying down a base of fire. Bipods can be deployed anywhere by zooming in with your LMG when prone, or when standing/kneeling in front of suitable supports, such as a window sill. The stability created by deploying a Bipod gives players a massive boost in accuracy and recoil reduction. You’ll be able to unload an entire clip of 200 bullets from your LMG with great accuracy without even letting go of the trigger, all thanks to the Bipod.

Suppressive Fire is a new in-game mechanic that changes how you can play the game. When you lay down fire in close vicinity to an enemy, the incoming barrage will show up as a graphical blur effect on his screen to stress him and let him know it’s not safe to pop out from behind cover. Just as importantly, this mechanic also affects his character’s in-game firing accuracy, making him less of a threat by using real world tactics. Better yet? You get team play experience points for doing so!

“Supported shooting with Bipods and Suppressive Fire finally allows us to achieve an obvious difference between Assault and Support, since the heavy LMGs are not terribly mobile,” explains Kertz. “When deployed with a Bipod, they become an incredibly powerful force. Suppressive Fire forces the enemy to keep their head down and lets the Support gunner pin his enemies in place so teammates can flank.”

Love him or hate him, Recon is the long range sniper class for Battlefield 3 who excels at gathering intel while on the battlefield. His sniper scope gives this class a distinct view of the battlefield, making Recon particularly suited for spotting enemies as seen in Battlefield: Bad Company 2, ensuring your entire team can see the locations of spotted members of the opposing team. “Recon traditionally has been seen as just a sniper,” Kertz said. “We wanted to change that perception, so we’ve built several completely new teamplay oriented gadgets specifically for the Recon class so he can be a team player, even if he’s sitting on the top of Wookie Mountain.” We’ll talk more about these toys and how they work in a blog post a bit further down the road.

Even though each soldier has a default loadout, they’re there for you to completely customise, making sure you’re able to cater to your own unique style so you can play it your way.

Well here we go people it looks like the Battlefield 2042 Update 0.3.0 is the one you have all been waiting for, this battlefield 2042 update is the biggest so far and also brings several additions to the game. Only time is going to tell if this has fixed som…

Battlefield 2042 Update 0.2.2 is available on November 25, and brings a set of balance changes for vehicles and weapons, and fixes for critical bugs we found during the Early Access week of November 12. For vehicles such as the LCAA Hovercraft, MD540 Nightbir…

The Battlefield 2042 Update 0.2.1 has now been pumped out ahead of the world wide launch tomorrow, this in our opinion will the first of many updates as the game itself has many issues. We have seen, heard and read about many issues in the game and we are hol…